Like a fetus in a womb, I’ve been snuggled into my stadium seat in a dark Kabuki theater. Absorbing, reflecting, enjoying. This festival does nurture me and many others, as does its parent organization, CAAM. SFIAAFF brings the life of Asia and Asian America to you through the powerful umbilical cord of film. 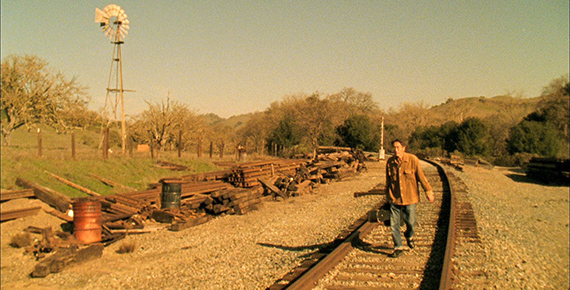 Like a fetus in a womb, I’ve been snuggled into my stadium seat in a dark Kabuki theater. Absorbing, reflecting, enjoying. This festival does nurture me and many others, as does its parent organization, CAAM. SFIAAFF brings the life of Asia and Asian America to you through the powerful umbilical cord of film. Like all life, the primary drives are for survival, growth, and adaptation. This is especially important in these difficult economic times. I’ve heard rumors that the festival cut back significantly this year: 25% fewer seats, fewer films, etc. It’s barely been noticeable, though, because of the dedication of CAAM staffers to bring us such a fine experience, an experience that draws people from around the globe. But CAAM needs your support to keep doing this. I hope everyone digs a little deeper this year, to ensure the umbilical cord keeps working its magic.

The last three days have been an immersion in shorts, or features that have some connection to shorts. My friend Emily Chang (along with co-director Dan DiLorenzo) premiered their short THE HUMBERVILLE POETRY SLAM in the program IS IT WORTH IT? LEMME WORK IT. I crossed paths with Emily on the spoken word circuit. She was part of the groundbreaking spoken word group I Was Born With Two Tongues. Their album BROKEN SPEAK is a classic, one of the most phenomenal works I’ve ever listened to; if you haven’t heard it, go out and find a copy NOW.

I spent an afternoon with Emily and Dan, traipsing through the Mission, from Farolito’s to Humphry Slocombe Ice Cream to Tartine’s to Bi-Rite. Oh, and we saw a few murals, shops and the Mission Dolores between bites. (Emily and Dan, I’m still not hungry.) And yes, dear readers, this does mean that Superfan does something on his vacation other than watch movies! Along the way, they told me about the process of their film, which had me doubled over in laughter later that night. Seriously, Emily said she could hear me laughing, and we were on opposite sides of the theater. To be fair, I could hear her laughing at my laugh. Anybody hiring for laugh tracks, I’m your man.

Emily was suspiciously careful to say that the characters in her film were not directly based on any actual poetry slammers. She talked to her compatriot Dan about some of the people she’d seen slamming (they were both working at the now-defunct Imaginasian at the time), and a light bulb went off. The subject seemed ripe for Mockumentary. Emily had an open call for bad poetry, which was surprisingly fruitful, given the enormous and non-mockable talent of the illustrious spoken word community. Okay, I’m gonna get in trouble for that. They gathered a cast, which included Giles Li, who also happens to be a truly great spoken word artist (and unafraid of mocking the poetry scene and himself). Three weekends of filming, and over a year of editing later, HUMBERVILLE was born. “It’s done with love,” Emily said over a Farolito’s Veggie Burrito. Dan said the writing was always a careful balance between inside-jokes and outsider mean-spiritedness. My busted gut proves they pulled it off.

There were also two other truly outstanding shorts in this same program. WAITING FOR A TRAIN: THE TOSHIO HIRANO STORY by Oscar Bucher was a brilliant, 21-minute biography of a San Francisco musician who was transformed and thunderstruck by hearing bluegrass music while a schoolboy in Japan, and was inspired to “see the land” that inspired the music, traveling by bicycle through Appalachia, playing guitar along the way. His dedication to his craft and dream was an inspiring reminder of life’s possibilities. Corinne Manabat’s EXCUSE MY GANGSTA WAYS was an extraordinary look at Davina Wan’s intense and troubled youth of drugs, crime and family dysfunction, and her eventual transformation. There’s a lot of pain in this incredible young woman’s world, and the whole audience was moved by her journey. Also noteworthy was Randall Okita’s MACHINE WITH WISHBONE. Whimsical contraptions kindle awe, and possibly even questions of machine-as-metaphor for life.

V. Prasad was on hand for his feature-writing debut, OCEAN OF PEARLS. Prasad had an outstanding short in the festival a few years ago, BHAKTI (DEVOTION), which was a beautiful film about a woman who finds transcendence through bharatanatyam. I’d even shown the film to several groups. Over a hundred psychiatrists enjoyed it as part of a spirituality and film program. I also showed it to a group of veterans, most of whom had psychotic disorders, as part of a music appreciation group. The men were deeply touched by the film; even the ones who normally fell asleep were rapt with attention. The group asked to see it again, and spoke of how moved they were by the woman. In one scene, she is distracted by voices, which could be voices from the street, bad memories or auditory hallucinations, but then is transformed by her devotion to the dance. This was especially meaningful to these men. Prasad told me this week that when he shared those comments with the dancer, she was moved to tears. Another example of the transformative power of film, and SFIAAFF.

OCEAN OF PEARLS had much to offer. I really liked the way it wrestled with issues of Sikh identity and discrimination. There was also a very timely storyline about the U.S. health care system. It turns out the director, Sarab Singh Neelam, is a doctor (and Sikh), and some of the film is loosely based on his experiences. I thought this concept could definitely work as a television series. I could picture the lead actors, Omid Abtahi and Navi Rawat, on GREY’S ANATOMY.

Another feature with a connection to a past short was CHILDREN OF INVENTION, by Tze Chun (WINDOWBREAKER was his short in SFIAAFF 2007). This reminded me of the tragic NOBODY KNOWS, also about abandoned children. Tze’s mother is lured by dreams of direct marketing millions, only to be swindled as a Gold Rep on Gold Mountain. Chun says that his experience of being dragged around to direct marketing conferences as a child was his inspiration. So, in a sense, he was a child of invention as well. Invent movies, make money, make more movies, his lead child character might say.

SECRET LIVES OF URBAN SPACES is also known as “Chi-hui’s program”, and his large fan club sold out the theater on Monday night. Chi-hui is known for his ability to appreciate complexity and abstraction. This was highlighted in the Q and A. Director Heather Keung (also the Artistic Director of the Toronto ReelAsian Festival) showed her short UPSIDE DOWN-DOWNSIDE UP, which consisted of a seven-minute take of her doing a headstand on a Hong Kong rooftop, her body swaying, making adjustments, and finally toppling, against the backdrop of erect skyscrapers. Chi-hui discussed how the film had brought up notions of impermanence – not only Heather, but all the buildings surrounding her, were subject to falling down. This interpretation wowed the audience, and perhaps even the director herself.

Sergio De La Torre’s NUEVO DRAGON CITY (which consisted of Chinese teenagers slowly barricading themselves inside an abandoned store in Tijuana) evoked notions of cultural barriers in Mexico. I didn’t take a semiotics course in college, but boy, am I getting it at SFIAAFF!

Directors Bornila Chatterjee and Hwa-Jun Lee were also on hand during FAMILY PORTRAITS. Chatterjee’s short, DIDA REEMA ANJANA, took viewers into the lives of three generations of Indian women, and resonated with connection and dissonance. A GREEN MOUNTAIN IN THE DRAWER by Lee would easily make my short list of favorites in this year’s festival. A wonderfully filmed and edited revelation of an elderly Korean woman’s memories and redemption, I found it mature and eloquent, particularly since it is Lee’s debut. This is his thesis film from SFSU. I expect a great feature from him someday.

I also enjoyed screening IT’S EASY BECAUSE YOU’RE BEAUTIFUL. Kevin Barker’s FIVE FINGERS was fun – about palm reading and palm lifting, with a psychological twist. OBJECT LOSS by A. Moon dealt with adoption and existence. Mina Yonezawa, who had a crazy Japanese beach party music video in 2007 sent with A HAPPY THERMOMETER. We were just unhappy that Mina wasn’t here. I also enjoyed Josh Kim’s THE POSTCARD, which reminded me of a short by Jessica Yu. I can’t remember the title, but the twist in both films is that we think the romantic intent is heterosexual, but we get a surprise.

TOKYO! is a triptych of short films by non-Japanese directors but set in Tokyo. I loved this film, and actually saw it twice – once on screener and once again last night. It opens next week – definitely see it in the theaters. The subconscious or inner emotional life was the main character in all three films. An insecure woman wants desperately to be useful and needed; she gets what she asks for. Violence comes from the sewers of Tokyo, propelled by the (suppressed) memories of the violence of Imperial Japan. And finally, a hikikomori (or shut-in) finds that only love can shake down the walls that separate us from each other, and from life.

I also enjoyed YOU DON’T KNOW JACK: THE JACK SOO STORY. Seatmate Robynn Takayama said after the film that she now has a new Japanese American hero. We now know Jack, thanks to Jeff Adachi and crew.

I think I better stop now, before I’m late for the Closing night film, TREELESS MOUNTAIN. And before I decide to attach any bad poetry.

Save me a seat!

Ravi Chandra, M.D. is a psychiatrist and film enthusiast in San Francisco. He actually did write bad poetry inspired by SFIAAFF, and came dangerously close to putting it in his blog entry. Consider yourself lucky.