My day started with hanging out with SPEED OF LIFE director Ed Radke and videographer friend Sevgi Stephenson with the student delegates at a nearby cafe. The conversation wandered all around - how to deal with the confusion of what to do next in life, how it's cool to do what you love 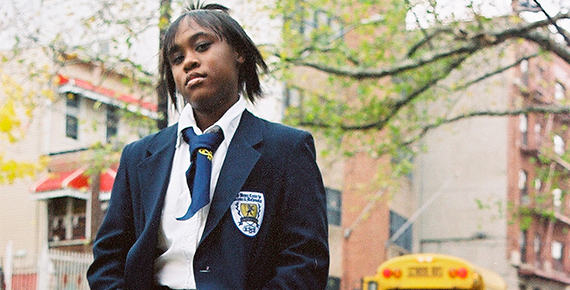 My day started with hanging out with SPEED OF LIFE director Ed Radke and videographer friend Sevgi Stephenson with the student delegates at a nearby cafe. The conversation wandered all around – how to deal with the confusion of what to do next in life, how it’s cool to do what you love, how sweet the chai lattes that some of the group ordered was, and how to best create honest and believable characters in a screenplay (know everything about them, inside and out). Needless to say, Ed’s an inspiring dude who I think got us all feeling a little better about our futures, assuring us that whether you want to write Saw VII or the next quirky indie flick, or even if you want to spend your 9 to 5 in a Ford assembly line, it’s all good if you find satisfaction in what you do. Aw, thanks.

We ran to the Kabuki for the next screening on our schedule: PROJECT KASHMIR. The two directors, Geeta Patel and Senain Kheshgi, introduced their documentary by assuring the audience that it’s alright to not think too hard while watching their film, and that if you feel confused, that’s okay. What the film ended up evoking in me was not quite confusion, but a realistic open-endedness. The subtle clashing between Muzamil, Geeta, and Senain, in a satisfying metaphor, reflect the complicated conflict of Kashmir. The discussion during the Q&A about the film’s unique ability to cover the gray area of the conflict brought to mind that perhaps this grayness is what makes this an American film. As Geeta and Senain delved deeper into the lives of the Kashmiris, they felt to me increasingly obviously like straight-up Americans in a foreign country – even though even a crossing militant comments that they sure don’t look like foreigners. A predicament of people of color born and/or raised in America: here, we may look like the Other, but in a foreign land, we are unavoidably American.

Favorite, most tear-jerking quote (yes. I shed some tears for several scenes in this movie.): “If your heart breaks, you can become anything.” Said over dinner when Muzamil first introduces Aarti to Geeta and Senain. Looking back and reading that has much less impact than when it was said in the film, but the placement of such a line was what did it – the all too real, pained looks on Muzamil and Aarti’s faces as they try to do their emotional turmoil justice with words, talking about all they had lost? I can’t really do that sort of emotion justice with a blog post, but I felt connected with the people in the film at the moment. As Geeta put during the Q&A, their type of suffering could be you – AND they still had hope. The important thing is awareness, and to never stop talking with people of all opinions.

Halfway through the next film we saw, WHATEVER IT TAKES, Luc-Van nudged me and whispered, is that the guy in the movie sitting in front of us? I leaned forward a little bit and yes, Luc-Van, that certainly is Principal Tom, the most prominent person in the film, sitting in the seat before us. Oh, SFIAAFF… always with the surprises. The principal does an excellent job of fiercely breaking the demasculated Asian male stereotype. Major, major props for this to both Mr. Tom himself and the filmmaker, Christopher Wong.

What took me by surprise with this documentary is by how naturally the students and teachers reacted to the cameras around them. With PROJECT KASHMIR earlier today and even with SPEED OF LIFE the night before, the camera is incredibly present, but the filmmaker in the in-school scenes of WHATEVER IT TAKES does an expert job of being a fly on the wall.

The great part about documentaries is that the stories aren’t over when the films are over. Hearing about where the people in the films are now gives the screenings today a vitality unique to the documentary style. More on WHATEVER IT TAKES after tomorrow morning, when the delegates meet with the director and the main character. On to Day 4!