I think my exhaustion has robbed me of witty headings and my convenient pool of descriptive adjectives. And thank goodness I was an hour early to my personal time-clock because I ended up being just on time for the screening of KARMA CALLING. What I want to know is why not more people came to see this movie. Because, yeah, um, with blatant bias, it rocked. 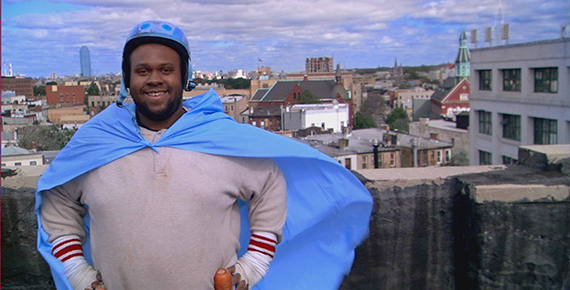 I think my exhaustion has robbed me of witty headings and my convenient pool of descriptive adjectives. And thank goodness I was an hour early to my personal time-clock because I ended up being just on time for the screening of KARMA CALLING.

Prior to the screening, I got myself a chai latte, in which I told myself that if I drank too fast, I’d have to go pee in 30 minutes; pace self. Too bad I just downed it within the first 30 minutes. KARMA CALLING tells the tale of the Raj family: dysfunctional, ridden with money issues, and suffering from hallucinations of Ganesha with NJ accent. It’s a quirky and fun piece: crossover of cultures (youngest Raj daughter, Ishani, really wants a bar mitzvah), making jokes out of outsourcing and the effects of McWorld (I just read this and I can’t even remember the proper term for it besides mass American cultural globalization which is a mouthful), and the spontaneity of human relations, whether it is in your own backyard or across the world (or in the filmmaking realm, across the room, hah). The most awesome thing is that it is director, Sarba Das’ and her whole familiy’s effort that makes this project possible. Talk about a literal family movie! [/lameface]

Then we cleared out of Theatre 4 in Kabuki and I guess I was completely caught off guard by a whole entourage of pink-tee-clad volunteers outside the doors because I totally gave KARMA CALLING a way too high of a rating. Look, it was scary; there were more than a dozen of them, all watching my every move as if saying, “I DARE you to give this movie something lower than a 5.” It’s not fair; I’m trying to concrete a better relationship with the volunteers and this is what they do. :(

What I want to know is why not more people came to see this movie. Because, yeah, um, with blatant bias, it rocked.

Last year, I wrote a 100-word long sentence for my advanced writing course starting with, “Grandma said to me….” When director Ed Radtke summed up his movie with his protagonist Sam’s voice re-voicing his Granny’s commentary on our perspective of the world, I thought, now this is universality. The SPEED OF LIFE (I have to apologize to Radtke, I kept calling the movie Speed of Sound or Speed of Light), visually, is a compiliation of different footage, a mirage of different styles, which all somehow come together behind the eyes of a young boy in Brooklyn, Sammer (whose droopy yet expressive eyes, personally, remind me of a basset hound). His life is encircled and surrounds a diverse crowd of other individuals, individuals whose strengths were their weaknesses as human beings. Sammer’s personal hobby resides in taking cameras from tourists in Times Square and that is barely the tip of the iceberg.

It’s raw; it’s gritty. But it’s also beautiful within its world that isn’t glossed over with a coat of prettification. There’s numerous dimensions to the story, aided by what Radtke calls visual openness, as well as characters who are complex but also painfully real (actors did a terrifyingly good job). I want to give a thumbs up to Radtke for localizing his film by asking people to contribute their footage, and even high school students from the area (I think) to provide their own camera work. Engaging the average Joe and Jane in the process is something that really captures people’s attention because um hi, public interest! Yes you! We are not ignoring you!

Radtke said to us that within this fictional world, we fall in in love with these made-up characters. We know they’re not real but there’s an underlying truth to them, that we can’t help but be in love with them. I am paraphasing worse than I was last night but, oh Radtke, you do not need to relate to our inner teenie fannish tendencies. But it is nice to know that you feel the same as us untalented, kind of pretentious, movie voyeurs.

I no longer know what my cold-bitten ears are listening to and my eyes can barely see (bah). But I would like to give a shout-out to my delegate compadres for making my dorky soul flail with incompetence. Especially this one; can’t even get brain to commentate on anything beyond “oh that’s good!” and move onto aesthetics and what worked and what didn’t.

Radtke, I can’t wait to meet you; I apologize in advance if I sound like a dweeb or fail to even say anything besides wave my arms frantically and stutter out a few vowels.