By Lauren Winsor Stenmoe To say I have been looking forward to the SFIAAFF would be a grand understatement. I can think of few things more exciting than to be able to view high-quality Asian-American cinema and have in-depth discussions with others who feel just as passionately as I do about the importance of this medium. 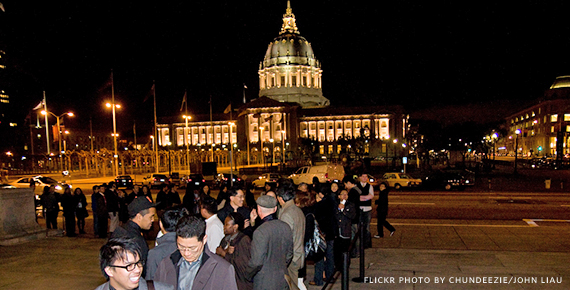 To say I have been looking forward to the SFIAAFF would be a grand understatement. I can think of few things more exciting than to be able to view high-quality Asian-American cinema and have in-depth discussions with others who feel just as passionately as I do about the importance of this medium.

Tonight was the first night and we were treated to My Dear Enemy, a Korean film by director Lee Yoon-ki about a daylong journey between two ex-lovers. It has been a year since their falling out and the woman has come back to collect the money that is owed to her.

What I found most fascinating about this film was how intelligently the situations played out. Instead of telling us exactly what happened between them, we are left to imagine what must have transpired. It’s obvious that they were once in love and something happened that was unforgivable, but this is based only on the atmosphere and the hinted dialogue. The characters don’t explain their feelings for the benefit of the audience and because they don’t, we understand how close they once were.

Ha Jung-woo is exceptionally charming as Byeong-woon. As he says himself, “Someone once said I could sell air conditioners in the North Pole.” In the way that he is able to woo anyone he comes into contact with, we understand why his friends would give him the money that he asks for. Somewhat of a womanizer, we can also see how this would get him into trouble and by the strong reaction by his ex, Hee-su, there is a possibility that this might have been some – or all – of the problem between them. Played by Jeon Do-yeon, she is a fantastic counterpart to Byeong-woon’s charm. She’s incredibly burnt out both in appearance and mentally and while we never quite know why she needs the money (Is it pride? Need? Principle?), it says a lot about their relationship and her character that she is so determined in her quest.

It’s this open-endedness that I found to be My Dear Enemy’s greatest strength. Just enough information was revealed to keep us interested, but not so much so that we felt like we knew everything. From the moment it opened with a long shot that took us between multiple characters to keep us guessing, I was constantly intrigued about where they were headed next on their journey and what each step was trying to tell us about the characters. This slice of life piece is a delicious character study at its finest.

Like many of the other delegates, midterms kept me from going to the Gala last night. But I hope those who did had a fantastic time!