By Anjuna Rose Antony Cameras flash away incessantly! Red carpets gleam! Fans and stars wait in excitement! Then I walk in. the wind blows the hair away from my face. I feel like a million bucks! The volunteers direct me to the guest check-in line. I tell them who I am – DELEGATE, STUDENT DELEGATE! I couldn’t wait to say that. I have been so excited ever since SFIAAFF picked me to one of their student delegates. I couldn’t wait to meet the others. 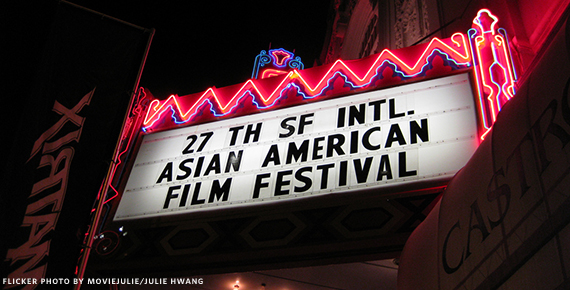 Cameras flash away incessantly! Red carpets gleam! Fans and stars wait in excitement! Then I walk in. the wind blows the hair away from my face. I feel like a million bucks! The volunteers direct me to the guest check-in line. I tell them who I am – DELEGATE, STUDENT DELEGATE! I couldn’t wait to say that. I have been so excited ever since SFIAAFF picked me to one of their student delegates. I couldn’t wait to meet the others. I have been attending this festival for the past 4-5 years. This festival is unique in how it treats its patrons. I have always felt like a VIP at the festival. This is the first year that SFIAAFF is doing this student delegate program. I wasn’t entirely sure what a student delegate will have to do. But it is my understanding that we are the student voice of the festival. As such it is my greatest pleasure to fill you in on my experiences at the festival.

Yesterday, the festival kicked off with its Opening Film and GALA. I got to attend the film but could not make it to the Gala. I imagine the Gala was a lot of fun. The opening film was very interesting.
SFIAAFF opened with Lee Yoon-Ki’s “MY DEAR ENEMY.” I have not watched any of director Lee Yoon-Ki’s films, but this was good introduction. It was like a good appetizer, I wanted to see more of this director’s work after the movie.

The film had an extraordinary opening, the likes of which I have not seen very often. It opens on a couple waiting in a parking lot. Then they get a phone call inviting them to the building next to them. As they walk in a few people are coming out, the camera abandons the couple and follows these people for a while. That is until a nervous lady enters the frame. The camera then picks up the lady and we follow her into the building. It turns out to be some kind of racing track. The lady is lost and looking for someone. She then finds the person she is looking for. It was the guy from the first couple the camera opened on. Then the story is revealed. Apparently this man owes this woman money and she is here to collect. She is also his ex-girlfriend from a year ago. The rest of the movie is basically him borrowing money from people he knows (mostly women) to repay his ex-girlfriend.

The opening is a little confusing at first but it works. The director mentioned in the opening that this opening was meant to make us feel like the female lead (the ex-girlfriend). He mentioned that this was his humble homage to his favorite film makers like Robert Altman, Woody Allen, and Stanley Kubrick. In my opinion the opening was exciting and grabbed my interest, but a little misdirecting. I was expecting it to be a movie similar to that of the OCEAN’s series, with full of witty fast paced, con artists sweeping us of our feet.

Well the movie does deliver us the con-artist. The lead male character is a charming, day-dreaming, con artist. Throughout the movie, this character draws us to his side, charming us with happy go-lucky attitude and sincerity. His motivations are clear and simple and we can easily identify and engage with him. But the female lead is a little harder to access. But since the camera makes her intimate to us, we end up rooting for her.

I was not clear about her motivations. It was not clear to me why she decided to ask her ex for the money after a year. Perhaps she was in dire need for money. She hints at it being more complex than that. But when confronted, she doesn’t reveal it to us. It leaves me wondering; if she just wanted to see him. Perhaps she wanted to confirmation that she did the right thing. Maybe she just missed him. It is almost as if she falls in love with him over again. Maybe she doesn’t know what she wants. But either way we fall in love with the both of them.

If I had to sum up the movie in one word, I would say that it was CHARMING! It is also a neat introduction to life in Seoul. It was a good cross section of the women in Seoul. It was a good watch. I came out wanting to watch more from this crew. The first act is really short, but the beginning of the second act is a little slow but then you are swept away by the movie. If you liked BEFORE SUNRISE, you will like this movie. I can’t wait for tonight’s screenings. Tonight we get to watch KARMA CALLING and THE SPEED OF LIFE. Check back to see my review of the movie.