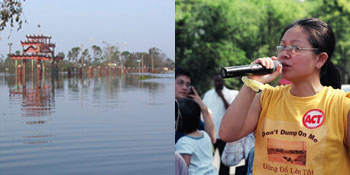 A VILLAGE CALLED VERSAILLES is a full-length documentary about Versailles, a community in eastern New Orleans first settled by Vietnamese refugees. After Hurricane Katrina, Versailles residents have impressively risen to the challenges by returning and rebuilding before most neighborhoods in New Orleans, only to have their homes threatened by a new government-imposed toxic landfill just two miles away. A VILLAGE CALLED VERSAILLES will recount the empowering story of how this group of people, who has already suffered so much in their lifetime, turns a devastating disaster into a catalyst for change and a chance for a better future.

A VILLAGE CALLED VERSAILLES is a co-production of Walking Iris Films and the Indpendent Television Service in association with the Center for Asian American Media, with funding provided by the Corporation for Pubic Broadcasting. Additional funding provided by Louisiana Endowment for the Humanities, Pacific Pioneer Fund, the Fleishhacker Foundation, and the BAVC Mediamaker Award