You may not have seen it on the news, but this week the service workers at the University of California campuses and hospitals have been holding a five-day strike to call for higher wages. 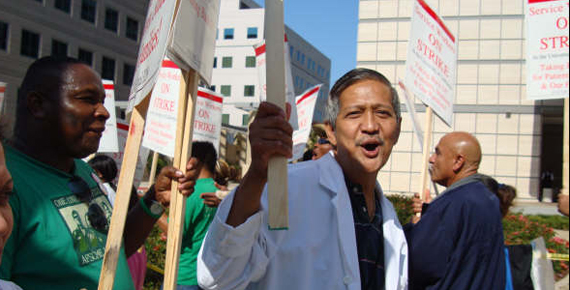 The first day of a week-long strike by 8,500 service workers at the University of California’s ten campuses and five medical centers. (Photo by Nicole Moore)

You may not have seen it on the news, but last week the service workers at the University of California campuses and hospitals held a five-day strike to call for higher wages. I might not have noticed it either if I hadn’t received an e-mail about the video “Facing Poverty at UC.” Directed by K. A. Christensen and Regan Pretlow Brashear, the ten-minute video includes interviews with state senator Leland Yee and state attorney Jenny Chung about the impoverished living conditions of UC service workers. As the video dramatically demonstrates, service workers’ current salaries at UC are so low that many of them qualify for welfare. Although UC administrators claim that there is not enough money to go around, Senator Yee recently sent a letter to the new UC President Mark Yudof objecting to such claims: “The public has also seen, and rejected, the University profusely spending resources on top executives while raising student fees.”

What amazes me about this video is how little of this I saw while studying at Berkeley. I knew about the difficulty of being a graduate student (and even walked in a few picket lines to protect teaching assistant salaries), but I had no awareness of the poverty-level lifestyles of the custodians who would start cleaning Wheeler Hall when I was getting ready to go home. And what’s remarkable is how easy it is not to notice this existence running parallel with our own. At the UC schools and hospitals, bathrooms are magically cleaned, garbage cans are emptied, cafeteria food is distributed, trees and grass trimmed, parking lots managed, and the campuses kept secure, all by invisible hands and bodies. There were 8,500 members of the AFSCME (American Federation of State, County and Municipal Employees Union) on strike last week trying to change this state of affairs and get the UC administration’s attention, after ten months of fruitless negotiation for a new contract. (There were also an additional 11,000 patient care workers who were not actively part of the strike but may have decided not to cross the picket lines.) UC administrators are offering minimum wages starting at $10.28 to $11.50 but fighting a statewide standard pay scale with step increases and overtime.

What does this have to do with Asian Americans? Besides the participation of Yee and Chung in the video, Asian Americans might seem to be more in the background of this issue, just like the soundtrack composed by Berkeley grad Shaw Pong Liu. Or perhaps on all sides of the issue—there are Asian American service workers, just as there are Asian American administrators. And Niesha Lofing’s article in the July 15 Sacramento Bee includes statements from Asian Americans on opposite sides of the debate: Yee advocating the right of the workers to strike, and David Ong voicing the UC Davis Medical Center’s warning of disciplinary action against these very workers.

One thing that does link this video with my interest in Asian American issues is the idea of invisibility. Asian Americans have had a great investment in becoming more visible—whether in historical accounts or public roles, from government to entertainment. Underlying this is the assumption that when you become visible to the American public at large, you will be understood and treated like a real person, not a type. Visibility suggests complexity, or at least the hope for it. The places where Asian Americans appear in this video as well as in the surrounding media coverage, show me that—at least in California—Asian Americans have achieved a level of visibility that would have gratified the generations before us: Asian Americans in government, law, the arts. But there are also Asian Americans who share the invisible position of the service workers featured in the youtube video.

The invisibility of workers living at low or minimum wages contrasts strikingly with the way these workers see themselves as part of the community. There’s a moment in the video when Rosa Tapia de Cruz, the senior custodian at UC San Diego, says, “We see the students as part of our family.” But the students may not see the workers at all. And the meager media coverage of this strike means the public may not either—at least, unless a similar strike happens in the fall and more people begin to realize that the campuses and hospitals no longer magically clean, maintain, and monitor themselves. We’ll see.

AFSCME’s position on the strike

UC’s press release on the strike