During the 2008 San Francisco International Asian American Film Festival, I sat down with director Gina Kim to discuss her latest film, NEVER FOREVER, which is currently playing in San Francisco at the Sundance Kabuki Cinemas. 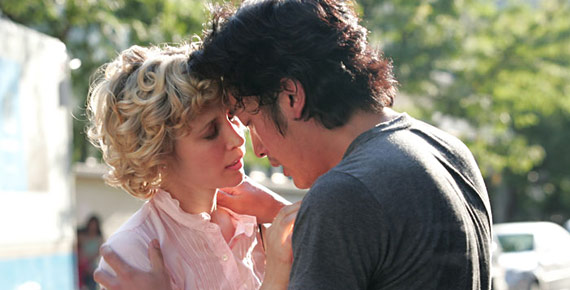 During the 2008 San Francisco International Asian American Film Festival, I sat down with director Gina Kim to discuss her latest film, NEVER FOREVER, which is currently playing in San Francisco at the Sundance Kabuki Cinemas. Kim grew up in Seoul, South Korea where she majored in Studio Art, before turning to Video Art at CalArts. She eventually made GINA KIM’S VIDEO DIARY and then her debut feature, INVISIBLE LIGHT. She views film as a “democratic medium” and a way to share her ideas with a wide audience. In her new film, Sophie is the Caucasian wife of her depressed and (unbeknownst to him) infertile Korean American husband. Sophie plots to make him happy and save the marriage by becoming pregnant. To do this, she begins an affair with a Korean man. Her feelings about both men, marriage, and children evolve dramatically in this compelling feature film.

RC: Tell me about the genesis for NEVER FOREVER.

KIM: I was always interested in the issue of the female body and female sexuality. Those have been the themes of all of my artmaking. Even when I was painting and making video art. In 2004, I started to teach at Harvard – a film production course as well as a Korean cinema course – so I had this wonderful chance to revisit all these classic movies that were made in the 1950’s and 60’s…I was really blown away by those films, because they were really radical…The 60’s Korean films were predominately melodramas, aimed for a women’s audience. They would touch upon the idea of women’s desire – like a women who gets money and then wants to run away from her husband. Or wants to have an affair, blah blah blah. The sad part was that feminism didn’t exist back then! (Laughs) So in the end, they compromise their integrity and go back home and ask forgiveness. But I thought, maybe I could combine the issues I’ve been struggling with…and use the genre of melodrama as a platform, but then not compromise the integrity of the female heroine, so that she could keep going until she gets what she really wants. From that point, the script just poured out of me, very easily.

Also, teaching at Harvard was a really great experience, not just because of the Harvard community, but also being in Boston. I was born and raised in Korea, and I lived in LA for a short period of time – I didn’t really have a lot of social consciousness for racism. When I was living in Boston, I noticed the stereotypes of Asian men – as an Asian woman, I was aware of the sexual connotations that get placed on the Asian woman’s body. But Asian masculinity was something new and fascinating. In this culture, East Asian men are not supposed to be sexual…stereotypes exist for East Asian men in this country…They’re seen as subhuman, outcastes (on one hand), and on the other hand, they’re these math geniuses or computer science geeks. But even the most successful Asian man has this anxiety of being emasculated. So I was looking for a way to combine all these racial issues and juxtapose them with the issues of feminism, and that became the premise of NEVER FOREVER.

RC: How would you define the Gina Kim genre?

KIM: I don’t think I’m that established to have a genre! (Laughs) But I think what’s important is to understand what people want in their lives. In most of my films, at some point, that question is brought up. In all of Ang Lee’s films, who I admire very much, the genre is not important – he just uses the genre as a platform, and says whatever he wants to say ultimately. He transforms, tweaks, and transcends the genre. I always want to explore the question “what do you want in your life?” Especially for women. Because it’s very hard for women to answer that question.

RC: That was Freud’s question – “what do women want?”

KIM: Yeah…and that was a really kind of derogatory question from Freud’s side, but I really want to subvert that question. But that’s what I always ask, “what do women want?” What would happen if she actually pursues that? That’s actually more important, I think. Sophie asks the question, then goes downhill, but ultimately gets what she wants. If she ends up killing people on the way, that becomes a horror film. If she falls in love by way of finding her true desire, then that becomes a melodrama. Or if she bumps into a lot of silly questions while traveling, that becomes a road movie or comedy. So the genre is not as important as the questions, the themes, that I want to talk about.

RC: What are you personally drawing on in your films?

KIM: My films are extremely autobiographical, in terms of what my characters think and feel. But in terms of what happens – that’s not related to my personal life at all. But I dig up my own psychology to come up with a story. That’s a bit narcissistic, but I think all art is more or less narcissistic anyway. I also draw from my family, friends, and surroundings. It’s just me trying to figure out what’s going on in my life and surroundings.

RC: In your film, the husband says to Sophie that she’s the “most unselfish person” he knows…but then there’s a change. Do you see that as being selfish?

KIM: One of the aesthetic aims I had with this film was to put multiple layers of irony onto a female body, which doesn’t really exist (in cinema). Unlike the complicated male characters. We’re either mothers or whores. We’re either sexual selfish beings or non-selfish mothers. I was sick and tired of those divisions, and wanted to put…contradictions on Sophie’s body. She starts out as a mother, then becomes a whore…but what’s interesting is that she becomes a whore because she wants to become a mother! Which negates the divisions, because that’s not true to begin with.

Ravi Chandra, M.D. (www.sfpsychiatry.com) is a psychiatrist and writer in San Francisco.