Presented for the first time in the US, this series celebrates the golden age of Japan's oldest and boldest film studio, NIKKATSU, with six super-stylized action films from the 50s to the 70s. 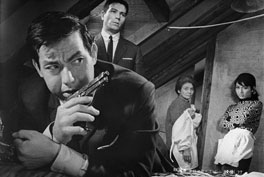 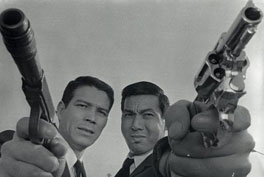 Presented for the first time in the US, this series celebrates the golden age of Japan’s oldest and boldest film studio, Nikkatsu, with six super-stylized action films from the 50s to the 70s. Influenced by both Hollywood and the French New Wave, these films reflect the Westernization that swept away old values, while teaching an entire generation a new Japanese meaning of cool. All films are presented on 35mm film with new digital subtitles. Series organized by Outcast Cinema with Yerba Buena Center for the Arts.

Thu, Apr 10, 7:30 pm
A COLT IS MY PASSPORT
BY TAKASHI NOMURA
With rival gang members in pursuit, a cool-headed killer (iconic Seijun
Suzuki favorite Joe Shishido) is desperate to get out of town after
pulling off a hit with his partner. The film is brilliantly stylish and
noir-inspired, a true undiscovered classic. Its lean direction and
wind-swept, empty locales play perfectly with Shishido’s panache and
tough-guy cool. (1967, 84 min)

Fri, Apr 11, 7:30 pm
ROUGHNECK
BY YASUHARU HASEBE
In this tough yakuza (Japanese gangster) film, Akira Kobayashi plays
Yuji, a hoodlum who becomes involved with an ototobun (younger gang
brother) trying to go straight. Yuji soon takes up with a hot springs
geisha, the lover of a local boss, whose gang is facing stiff
competition from an outside rival. (1969, 86 min)

Fri, Apr 11, 9:30 pm
GANGSTER VIP
BY TOSHIO MASUDA.
After spending three years in prison for stabbing a hitman from a rival
gang, Goro comes out disenchanted with yakuza life. When he decides to
abandon gangster life entirely, tragedy intervenes, and he sets out for
revenge. (1968, 93 min)

Sat, Apr 12, 7:30 pm
RED HANDKERCHIEF
BY TOSHIO MASUDA
Red Handkerchief is a perfect distillation of all that was Nikkatsu
noir: a steely hero, a desirable and slightly dangerous woman, and an
international milieu of tough guys, cops, gangsters, working-class good
guys and reluctant heroes. Big-shot cop Mikami (Yujiro Ishihara) fatally
shoots a witness during a drug investigation and moves to the country to
forget his tainted past. Years later, he returns to Yokohama to unravel
the truth about the unsolved case and his shady ex-partner, now married
to the woman he loves. (1964, 98 min)

Sat, Apr 12, 9:30 pm
GLASS JOHNNY: LOOKS LIKE A BEAST
BY KOREYOSHI KURAHARA
Inspired by Federico Fellini’s La Strada and a sharp departure from the
Nikkatsu action norm, Glass Johnny stars Joe Shishido as a bicycle track
tipster whose mission in life is to make a winner out of a struggling
rider and become rich as a result. Before he can achieve this, he
becomes the unwilling savior of a pure-hearted, simple-minded prostitute
(Izumi Ashikawa) on the run from her pimp. (1962, 108 min)

Sun, Apr 13, 7:30 pm
THE VELVET HUSTLER
BY TOSHIO MASUDA
A pop-art-colored romance between two doomed loners set amidst go-go
dancing kids, tough yakuza and the ever-present Americans, soldiers on
leave from the Vietnam War. Hiding out in Kobe, life spices up for
reckless gangster Goro (Tetsuya Watari) when he meets a gorgeous rich
girl, in town investigating the disappearance of her fiance. But in the
meantime, a robotic hitman from Tokyo has also come to town with another
agenda for him… (1967, 97 min)