A GENTLE BREEZE IN THE VILLAGE was the most warm, pleasant two hours I could have ever asked for. I do have to say it “Turrelled” me, but in the most welcome way possible. It Turrelled my heart. 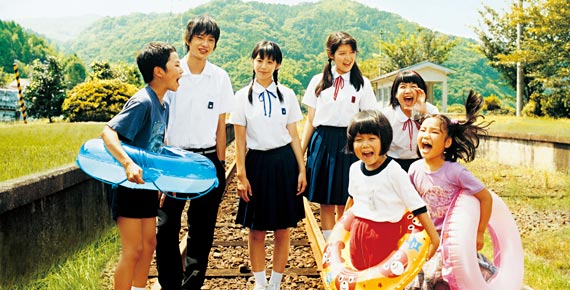 Naoshima Island, in Japan’s Seto Inland Sea, is an art refuge. Commissioned artworks grace the hills and shores of this tranquil, scenic setting. You can even spend the night in a museum which is also a hotel. Nearby is the Chichu Art Museum, housing works by accomplished modern masters. It’s an art immersion experience, much like the SFIAAFF. It was here that I encountered the works of James Turrell for the first time. He is nothing less than a sorcerer of the visual sense. His Open Sky project is a perfect example. You enter a smallish, square, concrete room at dusk with about 30 other participants, and take your seat around the edge. Above, the ceiling has an open square cut into it, framing the sky above. Gradually, as the sunlight starts to fade, a perimeter of lights tucked out of sight above us turns on, and emanates a succession of colors, from light green to deep purples and everything in between. There’s a silky blending of colors that play on the walls and the frame of the open sky ceiling. And here’s where Turrell gets into your head. The sky changes colors. As the frame shifts from light pastels to deep, dark hues, and your iris compensates, the sky seems to instantly shift from light blue to charcoal black. Turrell is manipulating your iris, retina, and brain tissue to produce his illusion. It’s a seductive and powerful demonstration, and for me, a bit unnerving. All his other works on the island have this same quality – the artist demonstrating a kind of power, bending photons to produce phantasm. It was pleasing, but there was a moment I felt a bit man-handled as well.

There’s probably an “axis of manipulation” of installation artists, ranging from Turrell to, say, Maya Lin; ranging from outright invasiveness to subtlety. Artists that essentially tell you what to think or do something to your senses to artists who are so subtle that we project our own meanings onto their work.

Likewise, there are similar gradients in film. The director of the film is responsible for overtly manipulating us in the sense of giving us all a shared experience. But there are films that “Turrell” our emotional senses (with fear or love, like say CRASH), and films that “Lin” us (i.e. the ones that eliminate plot or narrative entirely, like CAFÉ LUMIERE, or maybe the Roddy Bogawa documentary I WAS BORN BUT, both of previous festivals) that ask us to turn on our internal projectors. My friend Derek and I saw DESERT DREAM and SLINGSHOT over the last couple of days, and he commented that he’d seen many films this year of the latter type, verité style or close to it. There’s no plot-laden platter being served to us, and it’s up to us to fill in the blanks. Another friend, Linda, pulled me aside after one such film and asked, “Okay, what was that all about?” I guess the directors who are good at this style just wants us to thinggaboudit. I actually enjoyed both films; in each you got a sense of the people and their lives, and the places they called home. They really did give a glimpse into cultural and physical landscapes that were as much a character in the films as any of the people.

A GENTLE BREEZE IN THE VILLAGE was the most warm, pleasant two hours I could have ever asked for. I do have to say it “Turrelled” me, but in the most welcome way possible. It Turrelled my heart. We follow the slow, steady, quiet lives of children in a small Japanese village, growing instantly fond of them by the way they care for each other, almost always gentle with each other’s emotions. When that doesn’t happen, in the most subtle way, it’s crushing. There is trouble in the adult world, but childhood is innocent, and even the adults seem to be mindful guardians of the paradise of youth. The movie was a gentle tonic, gently awakening and soothing all our hearts, filling us with a wistfulness for that golden childhood. As the protagonist Suyo looks back into her middle-school classroom in the final scene, all our neurons concerned with secure, safe, loving attachments fired at once. Kabuki Theater One radiated love.

Last night was another night to time travel at the Kabuki, with documentaries about Asian American performers. ANNA MAY WONG: FROSTED YELLOW WILLOWS and LONG STORY SHORT played as a double feature. Together, they represented nearly a century of entertainment history as seen through the lives of Anna May Wong (PICCADILLY, PAVEMENT BUTTERFLY, and 70+ others) and the Long family. Director/writer Elaine Mae Woo and actor Jodi Long were on hand for questions, and Jodi’s delightful mother was also on hand, direct from New York City. Her memories of Japanese internment and wartime prejudice were especially touching (she is Japanese American while her former husband Larry Long was Chinese American; he passed away two years ago). It was really incredible to note the amount of time and effort that went into each of these films – 10 and 7 years, respectively. Woo and Long are really to be commended for their devotion which will stand as a memorial to their subjects, and a treasure for historians and film buffs.

Tonight, I’ll be seeing the shorts program MEMORY ARCADE and the festival’s perennial MUSIC VIDEO ASIA. I’m especially looking forward to Yu Gu’s NOTHING PILL (which appeals to my psychiatric interests, being about a cure for loneliness), and erstwhile CAAM staffer Chihiro Wimbush’s CROSS FADER. There’s also the spectacular BRIGHTER SUMMER DAY at the Clay tonight, part of the Edward Yang memorial retrospective. Or you could watch one of Richard Wong’s three (count ‘em three!) feature films in the festival this year, OPTION 3. (Richard says it’s a little early for his retrospective, but there you have it!) And I can’t wait to see Joan Chen in tomorrow’s Closing Night selection, HOME SONG STORIES. Then I’m eagerly anticipating the San Jose leg of the festival, with Richie Mehta’s AMAL the Opening Night selection there.

Finally, there is a gentle breeze in the CAAM village this week. I learned that Taro Goto, our much-loved Assistant Festival Director for the last 8 years, will be leaving CAAM this summer. He is moving to Japan to pursue his interests in freelance film production. On Monday night, CAAM staff serenaded Taro at Festa, a J-Town Karaoke bar, with “Don’t you forget about me”. We certainly could never forget about you. We will all miss you dearly, Taro, and wish you the best! Come back and visit us often.

Ravi Chandra, M.D. (www.sfpsychiatry.com) is a psychiatrist and writer in San Francisco