“So it begins!” said my friend Chihiro. The 26th annual SFIAAFF has been launched, and we’re on board for a fantastic ride. An incredible journey awaits. 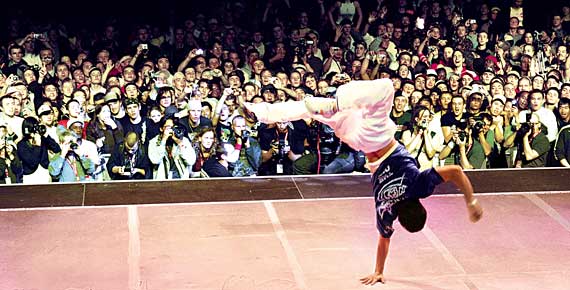 “So it begins!” said my friend Chihiro. The 26th annual SFIAAFF has been launched, and we’re on board for a fantastic ride. An incredible journey awaits.

You know you’ve traveled around the world when you’re having dinner in the Shinjuku district of Tokyo with a Japanese man who’s getting his Ph.D. in African American studies. And then you’re in SF watching a fantastic documentary (PLANET B-BOY) about the best breakdancers in the world – who happen to be Korean and Japanese (it’s sold out, but catch the theatrical release!). And then you have a perfect Vietnamese sandwich (on a baguette, of course) from the corner shop which is owned and operated by a Caucasian man. We are interconnected and interdependent; there’s no escaping our interbeing, and why would you want to? The festival is “Asian American” and “International”, and that’s centrally appealing to me as an Indian American man, but I keep coming back because each year I learn something about what it means to be human. Sure, there’s entertainment, but even this speaks to us in a special way that you can’t find easily elsewhere. The festival is an education in life, a window on the world. I always felt that I became a world traveler each time I settled in for a program. Last year, right after the festival ended, I became an actual world traveler. I took off on a 5 month sabbatical tour through Asia, and the films I’ve seen at SFIAAFF were frequently present in my mind. Soucheata Pouev’s wonderful documentary NEW YEAR BABY reverberated while I walked in Cambodia. Steven Okazaki’s MUSHROOM CLUB replayed as I attended the Hiroshima Peace Celebration on August 6th. And I had an unforgettable reminder of THE CATS OF MIRIKITANI because I actually met Jimmy Mirikitani and director Linda Hattendorf again in Hiroshima. This year promises equally poignant memories.

Wayne Wang delighted an enthusiastic opening night audience at the Castro theater with his indie feature, A THOUSAND YEARS OF GOOD PRAYERS, based on a short story by Yiyun Li. Always modest and understated, he encouraged us to laugh loudly at the humorous moments, but he didn’t have to – the crowd was with him all the way. During the Q and A, he offered telling insights on his motivation for the film, drawing on experiences with his own father. (And many viewers could relate, they told me later – maybe we should rename it “Hey – That’s My Family Film Festival!”) Veteran actor Henry O, was also on hand and much appreciated – one audience member thanked him for his sensitive portrayal of an elderly father, not often a subject of our youth-obsessed culture. The film was not grandiose in the slightest – just ordinary, heartfelt life, as plain as Spokane, where the film was shot. Relationships, rather than plot, was central, and as we witnessed the tension between father and daughter, daughter and lover, we felt all the ways we miss each other, lose each other. Loneliness and longing are universal heartaches, and in a darkened room, we looked for light and love. Maybe some found it, at the Gala afterparty at the Asian Art Museum. Well, at least we found sushi.

If you’re looking for more exquisite examinations of relationships, particularly between older and younger men – mentors, apprentices, fathers and sons – I would especially recommend the BY HAND shorts program. Men’s emotions are often difficult to uncover and portray, but this program really delivers. Other great films are on tap. NEVER FOREVER is director Gina Kim’s tender portrayal of a woman so intent on having a baby for her depressed but infertile husband that she hatches a scheme to become pregnant by another man; it was intriguing to watch this character’s emotions develop as she struggles with her love, desire to please, and whether to choose her own happiness. I’m also looking forward to WHISPERING SIDEWALKS (another only at the festival event!), Academy Award Winner Jessica Yu’s PING PONG PLAYA, Royston Tan’s 881, I’M A CYBORG BUT THAT’S OKAY, Michael Kang’s centerpiece presentation WEST 32nd (fresh from its theatrical release in South Korea) and Wisit Sasanatieng’s THE UNSEEABLE. And you can’t go wrong with the shorts – I’m seeing MORALITY CHECKS today, and LET’S GET OUTTA HERE tomorrow night. Jacqueline Kim (CHARLOTTE SOMETIMES) highly recommended Richie Mehta’s AMAL, and I’m only sorry that I won’t be able to attend all the fabulous panels, or hear from Linda Hoaglund or Risa Morimoto (WINGS OF DEFEAT) who will be on hand at their screening tonight. Their film got quite a bit of buzz in Japan when it premiered there last year.

That’s one tip I forgot to mention in the catalog – definitely try to stick around for the Q and A sessions. This is really the way to pick up the inside scoop. And dream of the day that you’ll be presenting your own feature and attending your own Q and A! Another tip: try to see at least one program in each of the categories of the festival. The screening committee always does a great job of picking out the cream of the crop for your viewing pleasure, and you won’t be disappointed.

Come to the festival, and get your own ticket to the world, and a map to your heart!

Ravi Chandra, M.D. is a psychiatrist and writer in San Francisco.