FILM: IT IS WHAT IT IS

Filmmaker Cyrus Yoshi Tabar, a first-generation Iranian-Japanese-American, has a photo of his grandparents holding him as an infant. The photo captures his first and last encounter with them. Seeking to understand the fracture in his family, Cyrus embarks on a journey into the dark and nebulous corners of his family history. Fragmented and cloudy images of his family speckle his investigation as he talks to his aunt and sister, but discovers that a family’s narrative isn’t linear and that truth is elusive. 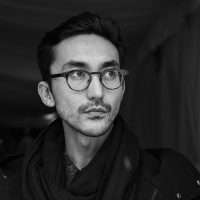 Cyrus Yoshi Tabar is an American filmmaker based in Oakland. He uses filmmaking to explore personal histories in perpetual motion. As an Iranian-Japanese-American, Cyrus externalizes the ambiguity of his multi-cultural identity into vibrant landscapes on the screen. His work has screened at Slamdance, CAAMFest, Antimatter Media Arts film festival. He currently teaches at California College of the Arts.