FILM: GIAP’S LAST DAY AT THE IRONING BOARD FACTORY

Coming from a trialing childhood, Tony Nguyen tracks back to his small hometown to reconnect with his Vietnamese mother. As he documents his and his mother’s journey, contrasting rural American imagery with Vietnamese subjects, the film captures the refugee history of adapting to life in the U.S. 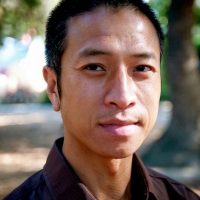 Tony Nguyen made his directorial debut in 2011 with Enforcing the Silence, which the LA Times called “an uplifting portrait” of slain journalist Lam Duong. In 2015 his personal film, Giap’s Last Day at the Ironing Board Factory, streamed and broadcast nationally on PBS and won the CAAMFest Award for Social Issue Documentary. In 2016 he served as an associate producer of the Emmy-nominated PBS Frontline documentary Terror in Little Saigon. In 2017 his short film, Fresh Frozen, about the best fish sandwich in Oakland, premiered at the inaugural DocLands Film Festival in Mill Valley. In 2019 he premiered his short G. Bronson at OAKLAND SHORTIES 2 at the New Parkway Theater. In addition to working on independent films, Tony is the in-house video producer for Asian Health Services and teaches in the Asian American Studies department at San Francisco State University.