Through a collage of voices and eras, Inheritance investigates what’s lost, gained and carried over in the process of diaspora. 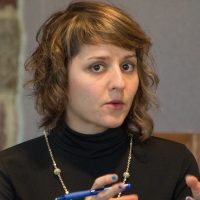 Aggie Ebrahimi Bazaz is an Iranian American practice-based researcher whose work aims to articulate documentary complicity in oppressive regimes while optimizing documentary power to undermine those regimes. Aggie’s first film, Inheritance (2012, 27 min) earned the Loni Ding Award for Social Issue Documentary at CAAMFest 2013 and the Short Film award at the 2015 Indie Grits Film Festival. Her recent film, How to Tell a True Immigrant Story (2019) world premiered as the first-ever VR film to be programmed in the Pardi di Domani shorts competition at the Locarno International Film Festival. Aggie has been artist-in-residence at the Wexner Center for the Arts, Skidmore Storytellers Institute, and Interlochen Center for the Arts, and in 2016 was named a BAVC National Mediamaker Fellow. She earned her M.A. in multicultural literature from the University of Georgia and her M.F.A. in filmmaking as a University Fellow at Temple University. Aggie is Assistant Professor of filmmaking at Georgia State University and continues work on a long-term project with a community of migratory families who live and work in California’s Central Valley.