Class is in session at the California School for the Deaf; it’s a typical American high school, with jocks, nerds, misfits, cheerleaders, and new kids. In Making Noise in Silence, follow two Korean American teens as they discoverwhat it means to be both Deaf and Korean. 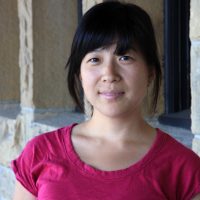 Mina T. Son is a Korean American documentary filmmaker based in Los Angeles. Mina has been awarded fellowships and funding from Independent Television Service, Film Independent, PBS/CPB Producers Academy, Bay Area Video Coalition, U.S. Japan Foundation, and Center for Cultural Innovation. Her debut feature-length documentary, Top Spin, was acquired by First Run Features and was hailed by the L.A. Times as “table tennis’ Hoop Dreams.” She has also worked as a producer at Facebook and WhatsApp, and is currently in production on a longitudinal documentary about the rebuilding of a small Japanese town after the 2011 tsunami. Mina holds an M.F.A. in Documentary from Stanford University and a B.A. in Psychology from the University of California, Los Angeles.